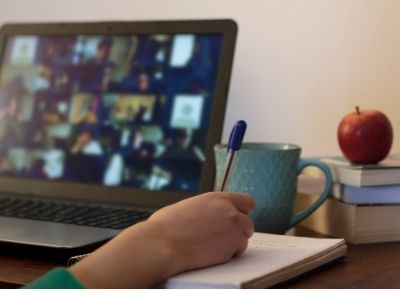 umbai, it’s Saturday at 4 PM. A woman named Geeta just opened her laptop and started a zoom meeting as she was the host. Geeta is the author of the bestselling book ‘Why don’t you try?’. She also runs a publishing house to publish the books of many new authors. For the same reason, she joined the zoom meeting, which she conducts on the weekly basis. In that zoom meeting, she met many new authors who wanted to publish their books through her publishing house. During the meeting, she helps authors with various aspects of writing. She also, helps the author to choose a suitable title for their book. Other authors in the meeting also give their suggestions or views/opinions about the book title.

Then she asked Sneha, who is one of the meeting members, to tell a little bit about her book. Based on her story, many other authors gave suggestions for her book. Her story was based on teenage love during the pandemic. After plenty of discussions, the title of her book gets decided. The decided title was ‘Love 2020’. Similarly, in each meeting, the title of the book by a new author gets decided.

After the meeting, Geeta enjoyed the rest of her day with her friends and family. That week was going great for her until she saw Police at her doorstep, on Friday. She was puzzled after seeing Police. Still, she welcomed them to her house. The Police wanted to ask her a few questions regarding her weekly meeting. They asked her about the new authors who join her meeting regularly. They also wanted to know the dates from when those authors started joining. She gave all information to them and then she asked the reason.

Then the police inspector told her, “Past few months, we received many complaints related to bank account hacking. Just a few days back, we received a complaint from a girl Sneha. She told us that all of a sudden, Rs 100,000 got deducted from her account. When she was in our police station, she saw another person named Gautam, who also had a similar complaint. We then come to know that both used to join your meeting weekly. We asked them about a few more names and the cities from where they joined the meeting. We enquire about them and found that they too are victims of bank account hacking.”

Then Geeta said, “Oh my God, but they never told me about this in the meeting.”

“Maybe because they didn’t know the connection. Many people in your meeting were the victim of hacking, but they didn’t know about others.” The police officer replied. Then he thanked Geeta for her help and left. After this, Geeta immediately called Sneha and many other authors from her meeting. When she was talking to Sneha, she said that a few days back, she received a message from an unknown number. The message was ‘Why don’t you try Dharavi’. Then Geeta said, “Did you inform the police about this?”

Sneha said, “Yes, of course. They checked Dharavi, but didn’t find anything.”

‘Why don’t you try?’ is the title of Geeta’s book. The criminal is trying to give some clue. So, she decided to go to Dharavi and search for some more clues. She informed Police about this. Then, she along with Police, Sneha, Gautam, and other authors residing in Mumbai went to Dharavi. When they reached there, they found many slums. While passing by that place, they witness the pathetic situation there. They saw many small kids crying for not having food. Many of them don’t have clothes on them. Sneha saw some kids searching for food from the trash. She broke while seeing that. She immediately bought some food from nearby shops and gave those kids.

However, their mission was to look for clues. They started looking all around. They all spread in different directions in the search for clues. Meanwhile, Gautam passed in front of a home. There he saw something unusual. He saw a poster on which “Circus of Life” was written. Circus of Life was the title of his upcoming book. It was decided in Geeta’s weekly meet. That poster was affixed on the wall of that home. Gautam went into that home. There he saw a person lying on a bed. He was paralyzed and his condition was critical. His wife was crying as she seems helpless. Their home has hardly anything else other than a bed and a few plates and glasses. They don’t have enough money for the treatment. Gautam gave them some money to help them. Then he looked around the house, but he didn’t find any clue.

Meanwhile, Geeta heard the ‘why don’t you try’ song. She saw a cassette player in front of the house. She and the Police went into that house. When they entered, they saw a drunk man beating his wife with a belt. His wife was crying and also trying to save her kids from his attack. That man was asking for money to buy more Liquor. That man stopped after seeing Geeta and Police. Police immediately arrested that man. Geeta wiped the tears of that woman. She supported her morally. Then she looked around for a clue. After looking around a bit, she saw a photo of a black gate lying on the floor. She remembered that the ‘black gate’ was the title of the book of one of the authors who attends her meeting. She informed police and others to search for a house with a black gate.

When they searched, the police and others all arrived in one place where they found a house with a black gate. When they entered that house, they saw many small kids sitting on the floor. There was a man in a black kurta who was doing some deal with some other men. When he saw the police, he tried to run away from there. However, that man and his team members get caught by police. Sneha asked Geeta, “What they were doing here?”

“Child trafficking,” Geeta replied. She was full of anger after seeing this situation. After that, when they came out of that house, they saw a box lying outside of the gate. On the box, it was written, ‘your money.’ But there are some buttons on the box to open it. Geeta said, “It’s password-protected.”

Then Sneha said, “Let me try the password. My book title was never used as a clue.”

She entered the title of her book ‘love 2020’ as a password, and it worked. The moment that box got opened, everyone received the message on their mobile. That message was from their bank stating that Rs 100,000 amount has been credited to your account. They all get their money back. Then Geeta saw a letter kept inside of that box. She opened it and read it. It was written,

I am very sorry, but I had a purpose behind it. I grew up in a slum, and I have faced all kinds of challenges here. I want you guys to write a book showing the pathetic situation of slums. You will be able to write the truth of the slum only when you see the situation here. Authors have the power to spread awareness among people, so I want you guys to write this book as a team.

I am sorry again.

After reading this letter, everyone took their complaint back to the police. They all formed a team to write a book on slums. Also, they started to help NGOs that work for the betterment of the slums.